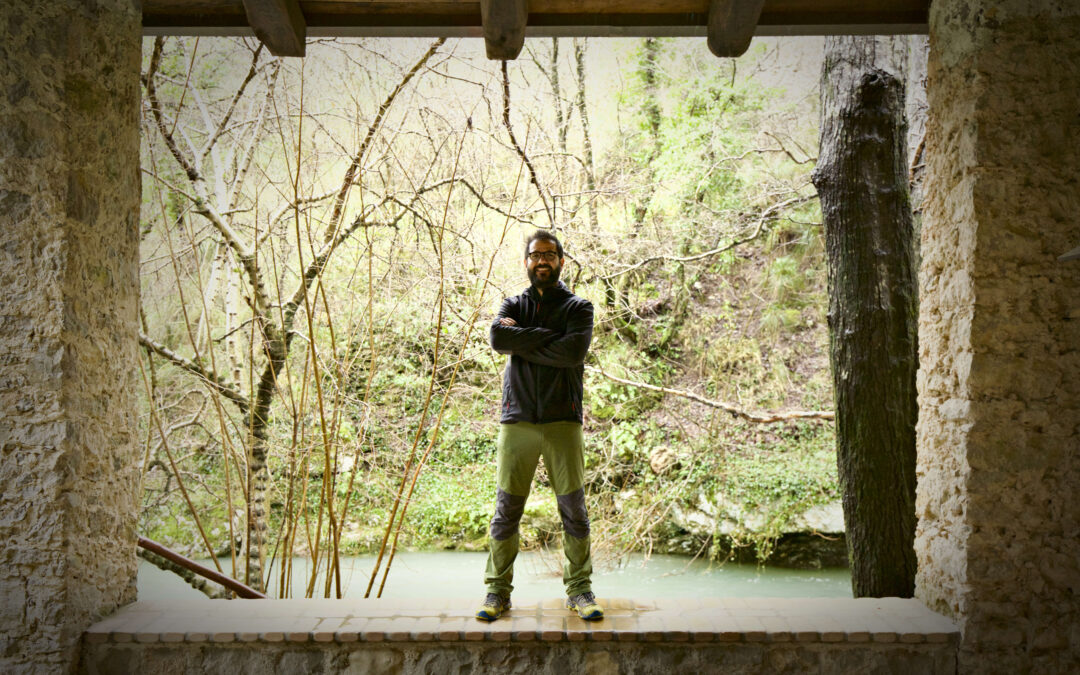 Many of our more diffused and less known cultural assets would be closed or inaccessible if it weren’t for local guides. Plus, the value of being part of a group is enhanced through walking , and seeing new ties and solidarity develop is amazing. Being in a group is not a form of constriction, but a form of sharing. Living an experience with others is a journey in itself”

The Pianoro di Ciolandrea is a natural terrace overlooking the sea of the Basso Cilento. Signs leading to it call it the “the lookout of the four regions”, because from here, on the clearest days, you can see not only Campania, but also Basilicata (the statue of the Cristo di Maratea and the peaks of the Lucano Apennines), the curve of that portion of Calabria that is lined by the Tyrrhenian Sea and then Sicily, with the Eolie Islands and their active volcano Stromboli. You get here from the shrine of Madonna di Pietrasanta, an hour on foot from the historic centre of medieval village San Giovanni a Piro (in the province of Salerno), around 450 metres above sea level.
One needs to walk these trails before they can appreciate and tell the story of Settimio Rienzo and of the idea that brought Cammini Bizantini (Byzantine Trails) to ReStartApp 2019. “Our objective, in creating these trails, is that of connecting sites that host important vestiges associated with Eastern rule in Southern Italy in the year One Thousand, with monasticism and with local traditions. Where possible, we restore historic trails or the routes that were followed by monks in the Early Middle Ages to move between hermitages and coenobiums, in this area lying across three regions. In these cases, we always tend to favour the latter option, even where they are longer, as they allow hikers to see the most interesting and beautiful things on our land” explains Settimio.

“A coenobium is the opposite of a hermitage. It is a place for monks in the same order to live a communal life” says Settimio. The Coenobium of San Giovanni Battista, in San Giovanni a Piro, is one of the most important monasteries of Greek monasticism in Southern Italy. The complex was erected during the 10th century by the Byzantine-rite Greek Italian monks known as Basilians, following the rule of Saint Basil the Great. They had settled in the area of Mount Bulgheria, where they owned vast areas of land, on which they began to grow olive trees and vines. “Signs of their presence include the caves known as Grotta degli Eremiti and Grotta del Ceraseto, only a short distance from the monastery complex they founded in 990” reads the website of association Sentieri del Cilento (Cilento Trails). The construction of the Coenobium is the reason behind the origin of the hamlet of San Giovanni a Piro, 480 m above sea level. Today, the Coenobium is state property. However, only ruins of the actual monastery remain, next to the church.

Sat high on a cliff dropping down to the Masseta coastMarine Protected Area, the Pianoro di Ciolandrea is part of a new itinerary that Cammini Bizantini is building for spring/summer 2021, involving the crossing of Mount Bulgheria, the massif behind the renowned tourist resort of Marina di Camerota (in the province of Salerno), in the Lucano Pre-Apennines, rising just a little more than 1,200 metres above sea level.
Here, the Cammini Bizantinigroups will be led by Lucio Sorrentino, whose association Sentieri del Cilento works to promote the area and the itineraries that start from the village of San Giovanni a Piro. As we climb through the woods, towards the shrine of Madonna di Pietrasanta, Lucio explains that that was the old route leading from “Scario (the outlying portion of San Giovanni located on the coast) to San Giovanni, or further up, to the shrine, whose original nucleus, a small temple, dates back to the 13th century”.