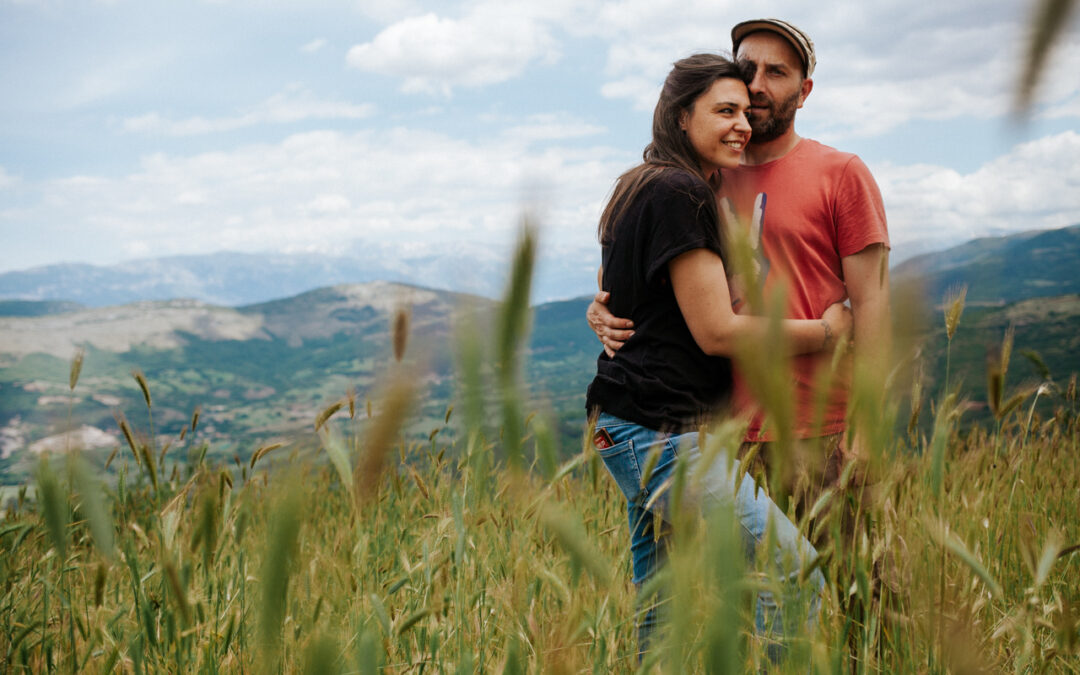 “I would like Gagliano Aterno to be a unique memory for those who visit us. Bees can be at the centre of this experience: a beehive can become an educational tool for both children and adults. We all need to learn and dialogue with Nature”

As we walk through the historic centre of Gagliano Aterno, Elisabetta’s accent immediately gives away that she was not born in this small hamlet in the province of L’Aquila, 650 metres above sea level, at the foot of Mount Sirente. “It’s my husband Ivan’s ‘fault’ if I’m here. Forty years ago, when he was a child and lived in Rome, his parents were looking for a place for their children to enjoy a better quality of life and breathe cleaner air. Rome is an hour and 50 minutes away by car and this was the perfect place. We’ve been together since 2010 and we’ve spent every summer here”, says Elisabetta. Born in Bettolle, in the province of Siena, she is 37 years old. When she met Ivan, she had come to what she now refers to as ‘her Abruzzo’ for the first time. In the aftermath of the earthquake that struck L’Aquila in 2009, she took part in the relief efforts provided by volunteer group Brigate di Solidarietà Attiva, in the Tempera camp, on the outskirts of the city. “It was there that I met some new friends from Rome and made a decision to move to the capital. I applied for an international volunteering project but was not chosen, so I carried on with my studies”.

Gagliano Aterno is among those villages that suffered the devastating effects of the earthquake of 6 April 2019. Yet, it is only now, over 12 years later, that reconstruction is finally beginning in its historic centre. In the period between the 1991 and 2011 censuses conducted by the Italian National Statistical Institute, the village lost more than a third of its inhabitants. Today, Gagliano Aterno has a population of 250. The homes involved in the rehabilitation works include that of Ivan’s parents. So, he and Elisabetta rented a house with a garden just outside the historic centre, where they moved to with their daughter Lara, who is almost two years old. “2021 is our ‘year zero’. I have taken a ‘leave from Rome’, while my husband, who works in the cinema industry as a foley artist, is currently living between Gagliano and Rome. After experiencing in 2020 all the difficulties of moving in Covid times, we have chosen to invest in Gagliano Aterno and the bees”.

At 3:32 am, on 6 April 6 2009, a violent earthquake struck L’Aquila, the capital of Abruzzo. The final count was 309 victims, over 1,600 people injured and about 80,000 displaced. The damage was calculated to amount to over 10 billion euros. The main shock reached a moment magnitude (Mw) of 6.3, with epicentre in Colle Miruci, in Roio, in between the outlying hamlets of Roio Colle, Genzano and Collefracido. The shock was felt throughout Central Italy.