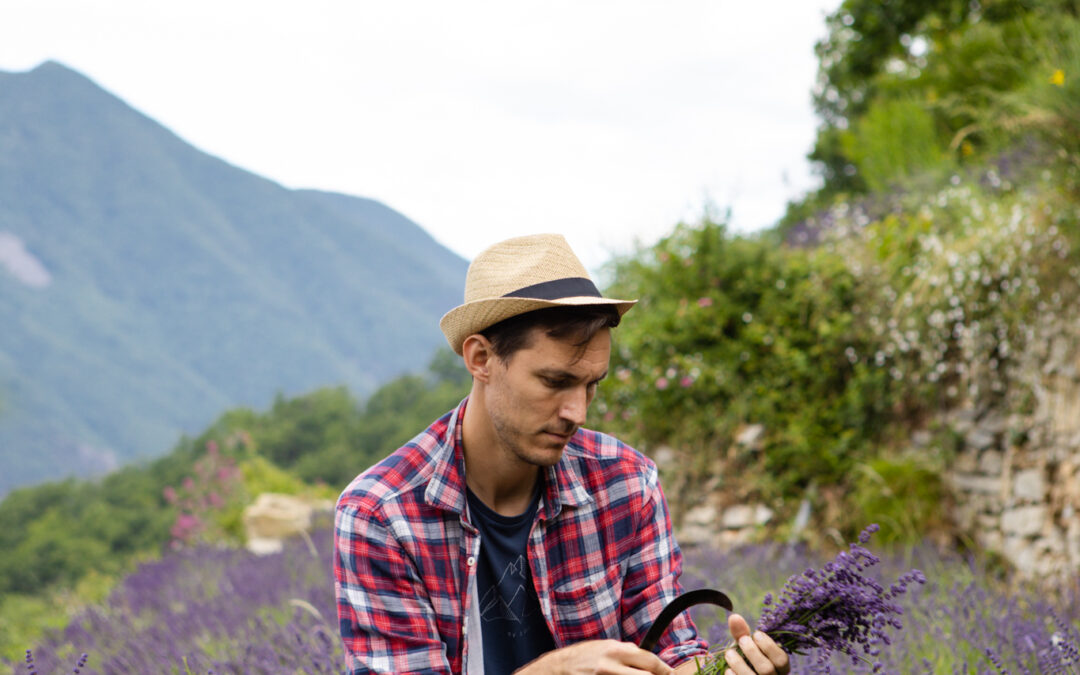 “Glori’s true wealth lies in its mixed community of elders from the Valle Argentina, immigrants and young people from all over Italy. For farmers, this is a difficult, vertical land, but it is also a land that remains unspoilt. Lavender is an indigenous plant of the Ligurian Alps, growing wildly in the mountains, and that is why I chose it”.

The road winds up towards Glori Superiore (in the province of Imperia). Federico shifts his off-roader into low gears. We are only twenty kilometres away from Arma di Taggia (in the province of Imperia) and the sea, but, from this tiny hamlet, looking down onto the valley formed by the Argentina river, the Ligurian coast seems like a whole differnt world. “In the ‘60s the road only got to Glori. This is a historically poor area, where farming the land is difficult, and people lived on a subsistence economy: vines to make wine in the upper localities, chestnut trees on the steep mountain sides, and olive trees in south-facing spots. Everywhere, the land has been carved into terraces, up to the pastures, but it remains unspoilt, as evidenced by the irrigation system that we have inherited, with wells drawing from the river and water so clean that newts and crayfish can still be found in it”, says Federico Guadalupi. In 2018, he decided to plant lavender in some terraces reclaimed from 70 years of neglect, now the headquarters of his farming business: ‘Biodiversamente’. “My land can only be reached on foot”, he explains, as we climb up the old path that once connected Glori to the higher hamlets, including Glori Superiore, a small group of houses almost 700 metres above sea level. “It’s not even a mule track”, he adds.

Federico – who was born and raised in Imperia and left his hometown to study Psychology at the University of Turin, returning after graduation – first came up here with a friend. “Luca and I were looking for an abandoned village for a community project and were exploring the area of Ormea, in the province of Cuneo. Luca is originally from Taggia and decided to take us to the Valle Argentina. We happened upon Glori by chance, but quickly realised that it was different from all the other villages. Here, immigration from abroad has extirpated the typical ‘Ligurian way of thinking’, which usually makes it difficult for strangers to gain an opening. There was something in the air that we liked”.