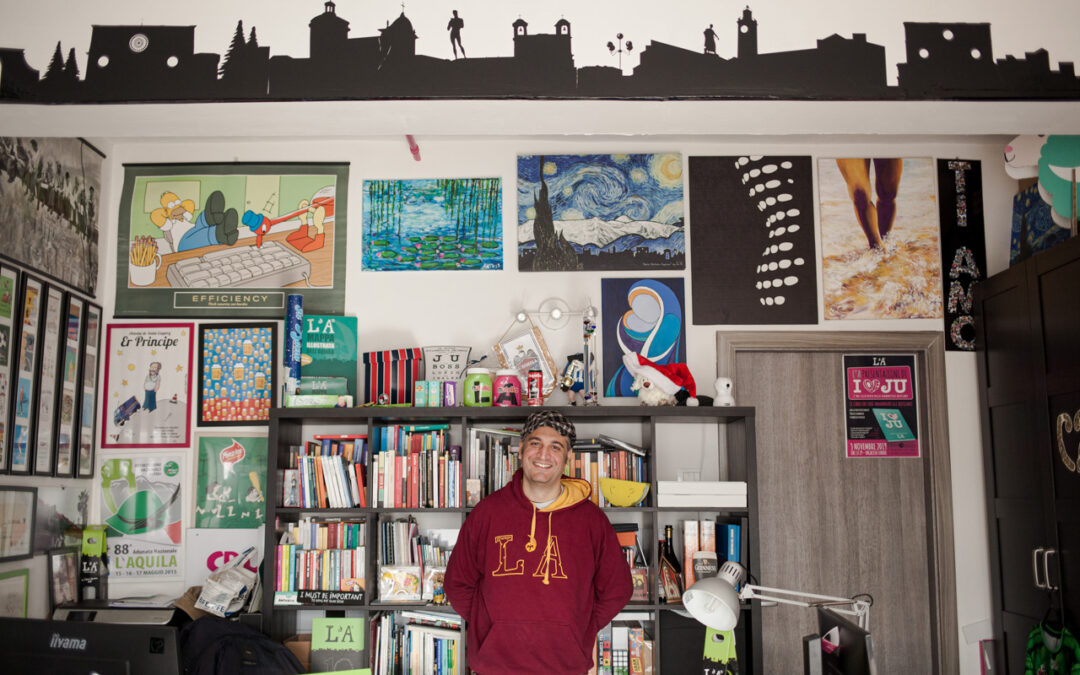 The POP objective of L’A’s work is to present a provincial town as if it were a metropolis, beginning from its typical features. Its dialect, but also its local recipes and traditions, become tools to create a sense of community, which is something that in L’Aquila, after the earthquake, was deeply felt”.

“A month after the earthquake, I had had enough of seeing news reports and reading articles in which my hometown was called ‘Aquila’. It was for that reason that I printed the first T-shirt, just for me” says Antonio Fruci. It was May 2009. In the night between 5 and 6 April, an earthquake had destroyed L’Aquila, his hometown, killing 309 people and leaving thousands homeless. That first T-shirt (yellow, with a screen-printed l, an apostrophe and an a: the ‘L’A’ brand) is now hanging on a wall in the headquarters of Caratteri Fusi, the territorial communication and marketing business that Antonio started after winning the first prize at ReStartApp 2015.

The adventure of L’A (that is elleapostrofoa) began almost by chance at the time of the earthquake, when the historic centre was closed as a red zone and friends were scattered across the neighbourhoods in the C.A.S.E. Project:”It was just meant to be my T-shirt, but two friends saw me wearing it and asked me to print one for them too. After a couple of days, some of their friends asked if they could have one… and then, with Facebook, the situation got out of hand,” says Antonio, who was born in Abruzzo’s capital in 1981 and has never moved from this city, in the middle of the Apennines, 715 meters above sea level, in between the Gran Sasso d’Italia and the Sirente-Velino mountains. Here, he graduated in Communication Culture at the Faculty of Letters and Philosophy of the University of L’Aquila and began working as a graphic designer, web designer and communication consultant. “When the earthquake happened, Stefania, my life and business partner, was working in Madrid. She was here for the Easter holidays and never went back. If previously I had thought of joining her in Spain, where she had a solid job, that April 6, 2009 changed everything,” explains Antonio.

The historic centre was closed as a red zone and friends were scattered across the neighbourhoods in the C.A.S.E. Project.

The acronym C.A.S.E. refers to the sustainable and eco-friendly earthquake-proof housing complexes that were built by the Italian government in 2009, in response to the emergency caused by the earthquake. The dwellings were meant for the citizens of L’Aquila whose homes had been destroyed or were now uninhabitable: 4,500 apartments, housing over 15,000 people, in proper neighbourhoods around the city. This, says Antonio Fruci, changed the way of living in the city: “Before, friends would meet in the centre, on foot, and walk from bar to bar. Now, instead, we need a car, we move away from our homes and we spend all evening at the same bar”. This situation inspired one of the first elleapostrofoa t-shirts, ‘stengo finito, reporteteme a’ (I’m drunk, please take me to), sold with a pin to be placed in the circle of the neighbourhood or village in which the wearer lives.